From Katakolon, Olympia is only 25 miles away. An visitor may use the new modern train that is clean and air-conditioned. The journey from Katakolo to Olympia lasts for approximately 45 minutes and the round trip ticket price is only 10€.

This 13 km branch line, originally operated by the Pyrgos – Katakolon Railway, opened in 1883 to link Pyrgos with the port of Katakolon. This line had its own terminal in Pyrgos. Later, in 1951, this railway was taken over by SPAP (Piraeus, Athens and Peloponnese Railways) and trains were diverted into the SPAP station. The line was modernized in 2007 and is used for a limited passenger service.

The ancient Olympia sites are a walking distance from the train station. However, if you are elderly or disabled, you can take a taxi. There are three trains plying this route, each leaving the station approximately 2 hours apart.

The train station is at the end of the shopping parade in Katakolon, approximately 200 yards from the port gates. If your ship has moored at the longest pier, 5-10 minutes probably allows sufficient time to walk to and from the station. 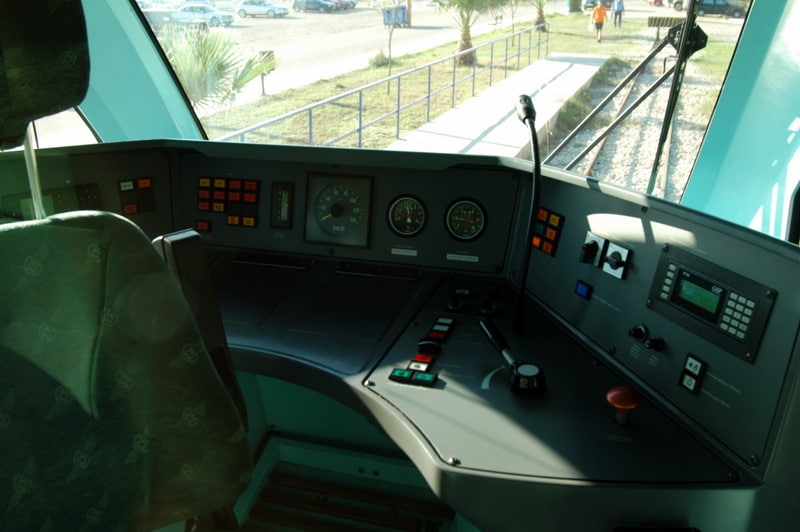 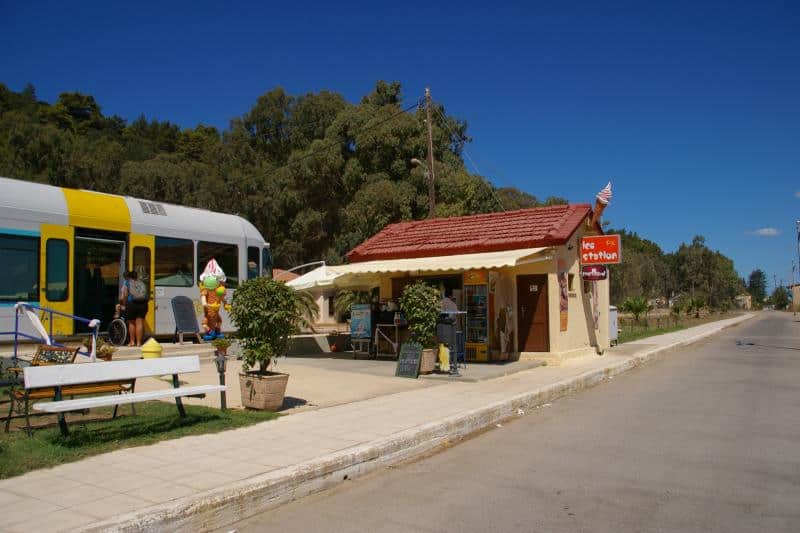 Throughout the year and depending on traffic, TRAINOSE schedules additional services for cruise passengers

At the port, there is a kiosk and an employee of the railway station on an every day base for issuing tickets and to give passengers information.

Further than the every day journeys, the train in Katakolo has the advantage to maneuver as regards to emergency routes and to increase its journeys, depending on the cruise and the number of visitors who descend from the boats. Each morning, when there is a cruise, the daily program is created, and the company’s employee informs the tourists of the routes and gives any other information that the tourists who want to visit ancient Olympia ask for.

The small train, despite the adverse economic conditions prevailing in the Greek and also in the global market as well as the increased competition, continues stably and is valuable, its routes, serving a multitude of tourists who choose it as a way of their transportation from the port to Ancient Olympia, with two basic criteria:

2) and the other, that it is fast, safe, modern and it moves on a way of incomparable beauty within the ten stations between many even settlements (Agios Ioannis, Granitseika, Sykia, Pelopio, Varvasaina, Epitalio, Alfeiousa etc) and by the passing of the Enipea river.

Special Rates and Discounts for cruise passengers ( from Katakolon to Ancient Olympia and back) and the “Sample Timetable”:

*notice: All Train operating hours are subject to change depending on the Cruise ship’s schedule. Exact hours are advertised daily in the railway kiosk in Katakolon Port.

The regular itineraries for the route Katakolon – Pyrgos – Olympia are as follows:

Ticket Price: 10 euros (aller-retour from Katakolon to Ancient Olympia and back) 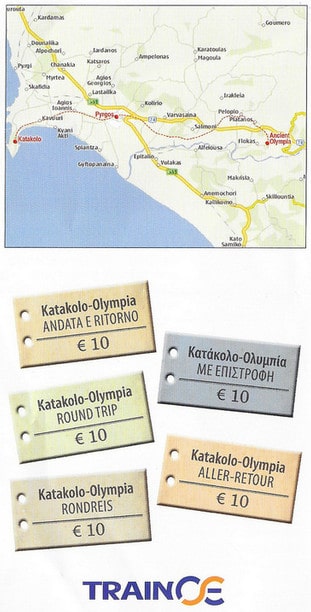 it is very easy to get the train to olympia for just a few euros, the express train is about a 5 minute walk away from where the ship docks and the first one is about 8.30 in the morning, we spent the morning in olympia and then had coffee in a lovely little cafe just outside olympia, catching about the 1.30 train back. the small beach near the ship is ok for a quick swim.

We got the 8:36 train from Katakolon to Olympia. Runs take about 30-40 minutes I think. We walked to the site and bypassed the museum. We had plenty of time to leisurely tour the area and be back in time to catch the train. Many people also went to the museum and they too made it back for the noon train. Olympia is a small town with the usual tourist shops so really not much else to see unless you want to shop or eat. Both trains we took were on time. The Katakalon train station is a 10 minute or less walk from the port. Easy to find.